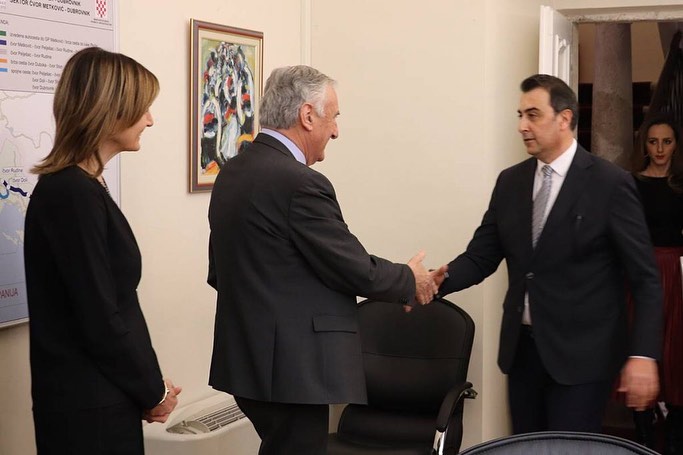 The delegation from the Tirana Region headed by the Chairman Aldrin Dalipi paid an official visit to Dubrovnik-Neretva County today.
On that occasion, a joint meeting of the President Nikola Dobroslavić and his associates with members of the Albanian delegation was held, at which the cooperation between the Dubrovnik-Neretva County and the Tirana region was discussed.
“Today, the President of the Tirana Region and the Vice-President of the Adriatic-Ionian Euroregion, Mr. Aldrin Dalipi, and his associates, visited our county. We have had good cooperation so far, so today we discussed several important topics, touching on the cooperation so far, as well as on future activities, “said President Nikola Dobroslavić.
“I informed my colleague Dalipi of the position not only of our county, but of the whole of Croatia, that the EU should open membership negotiations with Albania, but also Northern Macedonia, and that the EU should extend to the so-called countries, said the president and continued: “Unfortunately, this decision has not been made yet, but we hope that there will be positive developments after a meeting of EU leaders with the Western Balkan countries is held in Zagreb in May. In this context, we also discussed how Albanian regions can accelerate Albania’s path to the EU. Regions have to cooperate, come up with proposals, solutions … We had a long preparation for joining the European Union, it was not easy, but it is good that we went through it, because that is why we are a better country today, ”said President Dobroslavić.
The meeting also discussed the extremely important topic of road connectivity, which is important from the perspective of the Adriatic-Ionian Euroregion, emphasizing that connecting the countries on the Adriatic-Ionian highway remains a priority. “Our program is a high-speed rail on the Italian coast of the Adriatic Sea, and on the eastern, ie our coast, connecting with the Adriatic-Ionian highway. You know that we insist that the motorway in Croatia reach Osojnik, but we also want it to go through Greece through Bosnia and Herzegovina, Montenegro and Albania. Collegue Dalipi said today that they, for their part, are doing the projects, followed by the agreement of all the countries involved in the project, “the President said.
The President also said that during the meeting they also discussed other common topics, including the problem of waste coming to our coast, stressing that Albania is doing everything to move closer to European environmental standards, as Croatia is doing. We also talked about another common theme – the topic of the earthquake and the aftermath of the devastating earthquake that hit Albania last November, and we also expressed our readiness to assist the Albanian regions in meeting the requirements for EU membership in the area of functioning of the regions, and In this context, it was suggested that a group of students from the Tirana region come to Dubrovnik to learn firsthand how the counties, cities and municipalities function.
President of the Tirana Region Aldrin Dalipi thanked the PresidentDobroslavic and his associates for their hospitality, pointing out that this visit is a sign of gratitude for the long-standing cooperation and assistance of the Dubrovnik-Neretva County.
“I would like to congratulate Mr. Dobroslavic for his re-election to the Committee of the Regions, but also to thank him for the support he has provided us so far through his work in the Committee of the Regions. Also, colleague Dobroslavic expressed his solidarity with us after the terrible earthquake that occurred to us last November. We have cooperated a lot so far, Tirana and Dubrovnik have long had strong ties, and your experiences are important to us now, as we strive to open EU membership negotiations, and thank you for your support, “Dalipi said.
At the end of the meeting, Mayor Nikola Dobroslavic handed his colleague Dalipi a copy of a 15th-century letter that Albanian national hero Skenderbeg was sending to the Republic of Dubrovnik. “We have known for a long time that the cooperation between Tirana and Dubrovnik has been known for a long time, but this letter is physical proof that the cooperation between the Republic of Albania and the Republic of Dubrovnik was intensive at that time and that our cooperation has been going on for several centuries,” said Mayor Dobroslavic. The President of the Tirana Region thanked for this gift, pointing out that this letter is one big surprise for them, but also an honor, that it really means a lot to them and that they will certainly exhibit it as part of the museum exhibit.