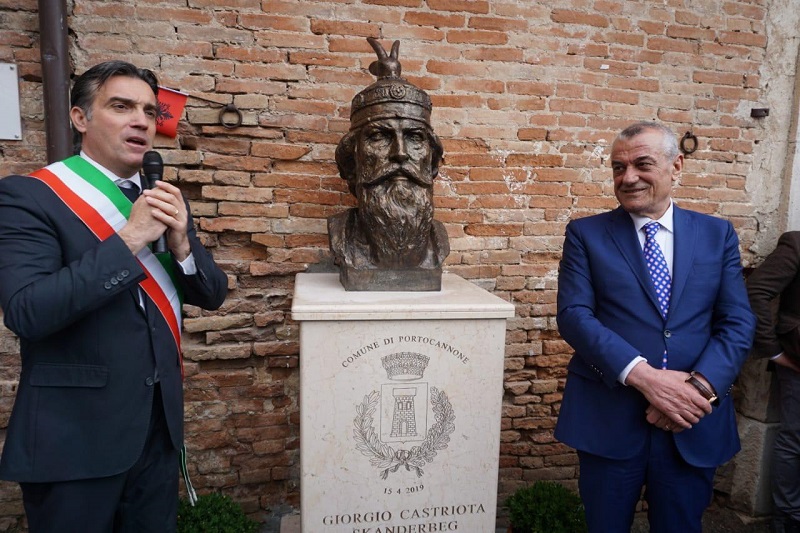 Chairman of the Parliament, Mr.Gramoz Ruçi was on a two-days official visit to Italy with the invitation of the President Fico Chamber of Deputies and President Casellati Senate.
Mr. Ruçi in this visit was accompanied by the Chairman of the Parliamentary Group of the Socialist Party Mr.Taulant Balla, the Chairwoman of the Foreign Affairs Committee and the Chair of the Friendship Group with Italy Mrs.Mimi Kodheli, the President of the Regional Council of Tirana, Mr.Aldrin Dalipi and the Ambassador of Albania in Italy Mrs. Anila Bitri.
The Chairman of the Parlament and the Albanian delegation were welcomed by the President of the Molise Region, Italy, Mr. Donato Toma, at the Palace of the Region in Campobasso. They talked about the successful cooperation of the Molise region with the Tirana region, with all inistitutions such as the ministries, agencies and local government bodies, supported by INTERREG, INTERREG-CARDS programs; INTERREG IPA II Italy-Albania-Montenegro etc., and underlined the importance of extending this cooperation with other institutions and regions of Albania.
President of the Molise Region, Mr. Donato Toma expressed his thanks to the Chairman of the Parliament, Mr. Gramoz Ruçi for his visit in the region, as well as in the Arbëresh municipalities, and underlined that cooperation with Albania is a priority.
Yesterday, the Arbëresh Portocannone town was in red and black. Scanderbeg’s statue was inaugurated and the Chairman of the Parliament, Mr.Gramoz Ruçi was honored with the title “Honorary Citizen” of Portocannone.
To welcome the Albanian delegation, hundreds of city residents, local authorities and school children were present at the event.
A giant red flag was placed in the city’s central square and fluttered at the hands of dozens of children.
“It is a great honor for our city to have among us for the first time such a high state authority from Albania. And this respect was paid by the Chairman of the Albanian Parliament, Mr.Gramoz Ruçi “, said the Mayor, Mr. Giuseppe Caporicci.
We are deeply grateful for promoting the ties and cooperation with Albania and four Arbëresh municipalities, in Molise region, and for bringing among us the statue of the Albanian national hero, Scanderbeg, makin our city honored by giving to Mr. Ruçi the “Honorary Citizen” title.
Chairman of the Region and Municipal Council of Tirana, Mr.Aldrin Dalipi stressed that this appreciation and honor is a message that politics is human and a non-conflict mission which undoubtedly surpasses Albania’s borders.
The Chairman of the Parliament, Mr. Ruçi inaugurated Scanderbeg’s statue, which is a work made by Mr. Mumtaz Dhrami, a honored sculptor, and was donated to the Municipality of Portocannone by the Regional Council of Tirana.
The statue of our National Hero was placed at the entrance of the City Hall building.