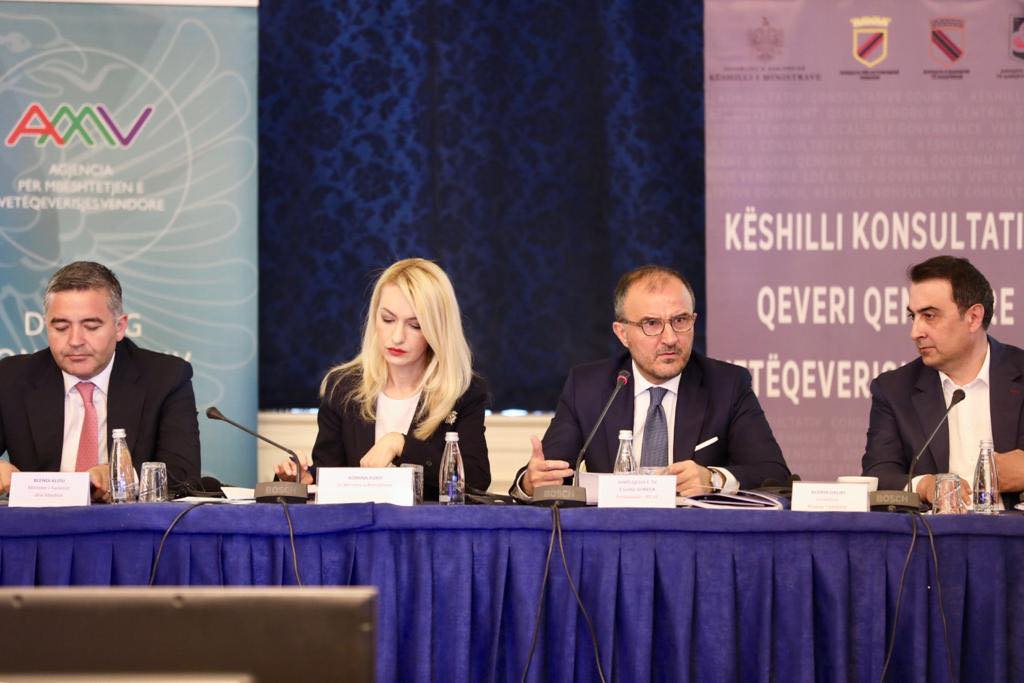 On Monday, 1st of April 2019, under the co-leadership of the Chairman of Albanian Association for Regional Councils, Mr. Aldrin Dalipi, and the Deputy Minister of Interior Affairs, Ms. Romina Kuko, was held the meeting of the Consultative Council between Central and Local Governance.
Topics of discussions were the presentation of several draft laws such as social assistance; determination of the competent authorities and procedures to be followed for the fulfillment of the court’s obligations for the juvenile in conflict with the law; as well as the draft decision on the adoption of the rules for the declaration of special areas conservation.
Council Meeting was attended by the Ambassador of the European Union to Albania, Mr. Luigi Soreca, who said that “decentralization needs more work to improve legislation and finance. Constructive attitude from all stakeholders is crucial and has a real and direct impact on the lives of all Albanian citizens.”
Regarding the study of “Matrix of Competences”, – Soreca said that “The EU sees this institutional mechanism for consultation between levels of government as a unique and productive opportunity for dialogue. We are increasingly aware of local governance and in particular the role that local governments play in the country’s EU integration process.” While pointing out that,- the government has recently undertaken a mid-term review of the decentralization strategy and is currently reviewing the respective action plan.
The head of the Tirana Regional Council, also co-chair of the Consultative Council, Mr. Aldrin Dalipi speaking to the media considers the Consultative Council as a very good opportunity for central and local government to consult before deciding on the adoption of laws. He said that there are some important components of the social aspect, tourism, land conservation, etc. that is closely related to local government, but the development of such issues should be done in accordance with the central government.
Present at the meeting of the Council was also the Minister of Tourism, Mr. Blendi Klosi, who in his speech said among other things that “our philosophy for sustainable tourism will be built on four main goals: Improving infrastructure in tourist destinations; Certification of accommodation structures and services they offer; Promotion of tourism products across borders and establishment of a professional training system for persons serving in this sector. With the creation of 6 poles of tourist potential throughout the country, we extend the time of stay not only during the summer season, but throughout the year, we increase the quality in accommodation structures, promote new investments, 4 and 5 star hotels, for a consolidated tourist offer! ”