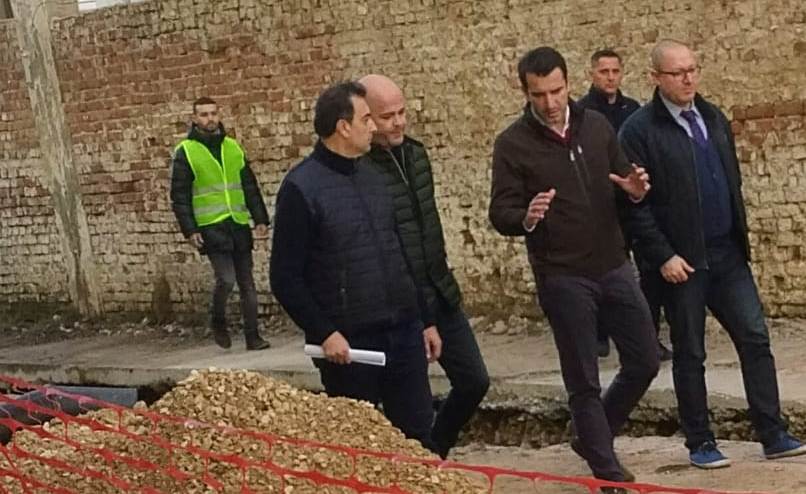 After 40 years of oblivion, about 13,000 people living across the Str. “Babë Rexha” will receive a better supply of potable water. The Tirana Municipality and Water Supply and Sewerage of Tirana (UKT) are carrying out one of the most important investments in the water supply sector, providing a whole new pipe-line that brings improved water supply to one of the capital’s largest neighborhood.

The Mayor of Tirana, Erion Veliaj, the head of the City Council, Aldrin Dalipi and the Director General of UKT, Redi Molla, inspected the works being carried out by the specialists, while appreciating the fact that this investment replaces a built pipeline from 1978, which was completely amortized. “Babë Rexha” is one of the areas of Unit no.7 which had the last investment, but in 4 years it was started at “Dogana”, went to the former “Aviation Field”, and continued at Str. “Dritan Hoxha”, Str. of “Kavaja”, to fix all transmission lines and sewers. This is a developing area, with new buildings, old mansions, even older homes, so I believe that water is one of the first things people ask, “Is there water 24 hours? Is there school, are there kindergartens, is there a nursery school? ” So, now we have an answer about the urbanization of the area, “said Veliaj.

He appraised the works being carried out in Bovilla-water collector for doubling the capital’s supply capacity with potable water and for the capillary reconstruction of the transmission lines. “We had the opportunity to see how Bovilla is working extremely well and for the first time, after twenty years, the capacity of Bovilla, the water we can put into the system, is doubled. But, this would had no impact if we continued with depleted lines at the capillary level. So, a full amortized system with holes in the pipes could not bring the needed water or would bring it in drops, something that was dramatically observed in the summer season. I am happy that, as we work where the problem is and Bovilla’s capacity is doubled, we are continuing the transmission line now at the capillary level, “he said.

Thanks to the investments of the Municipality of Tirana, within 5 years the capital will have a supply of drinking water for 24 hours a day. “We entered in 2019, which is the first year of our 5-year plan for Tirana with 24 hours with water. In 2024, we need to have water for 24 hours and I believe that as the first year of the plan we approved at the municipal council, we have a very good start with Bovilla, with the transmission line that gives water to all “Astir-neighborhood” and the new-ring road . If we get this investment by the end of March, it will be a good news for residents because it means that it will be the first summer without problems. I am convinced that we will look first and foremost with the inhabitants of this unit, “Veliaj underlined, while assuring that the works will continue with high pace.

“I am very enthusiastic about how the work is going; now we have to keep the pace! Tirana is the number one in the Republic today for drinking water payments. It means that there is no such thing such a city will not go further! So, from the weakest city we shifted today in the first row, meaning that people are willing, people love the state, people love the rule, people want to pay their bills as long as they see receiving the required services. If we keep this pace, I’m convinced that people will continue to support us, “he said.

The head of the Region and City Council of Tirana, Aldrin Dalipi thanked the Municipality of Tirana for the increased attention to this area, which had 40 years of no investment. “This area in these years has increased with unimaginable growth and in fact it was time to make another investment. For 40 years, this network has not been affected and I think that all residents are optimistic because they will eventually resolve the issue of water throughout the area and other areas that this network connects, “Dalipi said.

The Director of UKT, Redi Molla, explained that all the apartments in this area will be connected to the new water supply network, benefiting not only the quantity, but also the quality of the drinking water supply. New high-density polyethylene material is being used for the construction of the new transmission network to ensure quality and longevity of supply for an area considered to be 13,000 inhabitants. In addition to the control collectors at certain points of the network it is envisaged the construction of road hydrants at high density residential intersections.