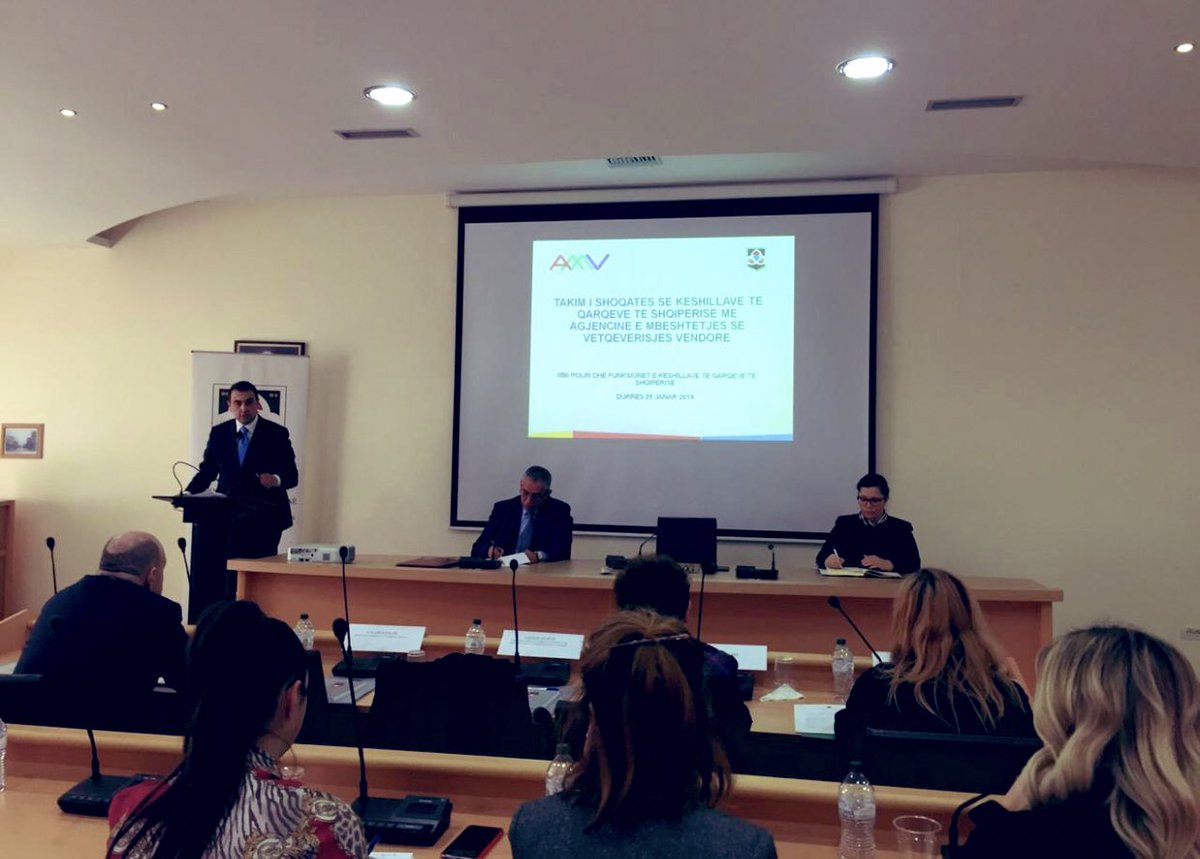 At the premises of the Durrës Regional Council, the Association of Regions held a consultative meeting with the Agency for Support of Local Self-Government.
In the meeting were present the Presidents of the 12 Regions of Albania, the Director of the Agency for Support to Local Self-Government and representatives from the central government.
During the meeting in the held discussions was emphasized the importance to influence through the dialogue and cooperation with the Agency for Support of Local Self-Government. The aim is to influence in the regional development and coordination, within legal, institutional and political responsibilities, for the benefit of the community, for interaction, progress of the European standards.
The Chairman of the Association, Mr. Aldrin Dalipi during his speech said that local government and central government dialogue is an important tool to strengthen the role of our institutions for more services to the citizens in the regional level.

Below the full speech of the President of the Association, Mr. Aldrin Dalipi
By wishing welcome hence, I express my appreciations for the meeting and the cooperation with the Agency for Supporting of Local Self-Government.
We, as Regional Councils, have respected in this first phase the implementation of the territorial reform, and the focus of the central institutions on the municipalities, but on the other side we have completely adapted to the new post-reform circumstances to fulfill our obligations as a constitutional institution in accordance with the Albanian Constitution, the law of local self-government, a series of legal and sub legal acts as well as the European Charter of Local Autonomy.
I think we have made an important contribution, as far as we are concerned with the development of our Regions, in cooperation with the municipalities in the catchment territory.
As an Association, we have provided a valuable expertise in the case of legally formatting the Consultative Council of Local Self-Government with the Central Government, in close cooperation with the partners. We continue to actively adhere as a members of the Regional Development Committee led by the Prime Minister with the participation of the central and local level as well as with the Albanian Development Fund supervisory council.
Right now we have to shift in another stage, the Regional Councils, to trust other competencies. A concrete example is the Draft Decision on the “Methodology for Financing Social Care Services” which will be discussed at the Consultative Council meeting next week.
The Association of Regional Councils of Albania is considered a positive example which represents both political forces in the country.
The best European experience has been brought to the regions by being a serious partner in regional international organisation. For this, there are an arrays of examples for our joint work with the international organizations we adhere, for which we have received their evaluations through partnerships in various projects funded by the European Union, but also from the Ministry of Europe and Foreign Affairs.
To be compared with European Union standards, we must take into consideration that the Council of Europe has always valued the primary importance of democracy at local and regional level. Local self-government should meet the needs of all residents in towns and villages, central and suburban areas and across borders.
We are ready and have the capacity for what is ours, that through dialogue and cooperation with the Agency for Local Self-Government to influence regional development and coordination in our circles, within our legal, institutional, political responsibilities with the aim for the benefit of the community, interaction, progress and European standards.
We believe that this mission, in spite of our mandates, is in the first place a shared responsibility.