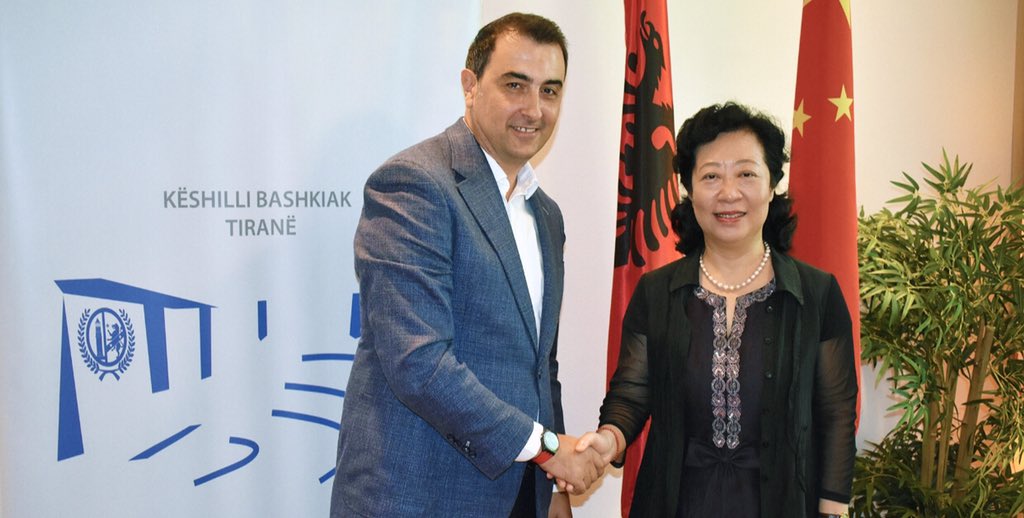 On the 10th anniversary of town twining among Tirana and Pekin, Head of Tirana Municipal Council and President of Tirana Region, meet Mrs. Yan Aoshuang, Deputy Chairwoman of the Standing Committee of the Beijing Municipal People’s Congress of the Chinese capital.
Mrs. Aoshuang headed a high level delegation, who visited Tirana with the aim for the further development of the relations among two cities on some very important sectors.
During the meeting among two delegations there were discussions on steps to be taken in order to enhance the relation among two municipal councils. Establishing contacts of respective thematic commissions, encouraging exchange and collaboration among entrepreneurs, universities, on technological development, on improving citizens’ live quality through different development programs, were some of the topics discussed during the meeting.
Tirana, the epicenter of the relations China-Europe
The Chinese delegation was received in a meeting also from the Mayor of Tirana, Mr. Erion Veliaj.
“This is a relation that started 10 years ago, when Edi Rama and the Mayor of Pekin signed the town twining among two capitals, This has been a first decade on an excellent relation, and we can’t wait to start an even more intensive collaboration with Pekin in the fields of transport, investments, culture and tourism; since we see these fields as the basis of a strong friendship and premises to further developing our town twining” said Mr. Veliaj, while as a sign of friendship granted to the Deputy Chairwoman of the Standing Committee of the Beijing Municipal People’s Congress of the Chinese capital, the “Key of the City”.
Tirana is set to be the hosting city of the Forum of Collaboration 16+1 of the Mayors on 2019, an initiative established form China, aiming to strengthen and amplify the economic, commercial and cultural exchanges with 11 European Union Member states and 5 states of the Balkans. Veliaj expressed his assurance that this high level forum will make of Tirana the epicenter of the relations of China with Europe.
“One of the things we talked upon today is the fact of Tirana being appointed as the hosting city of the Forum “China +16” of Mayors on 2019. Today is time to intensively start our work to welcome in Tirana the delegation of the Chinese government and 16 mayors of Central and Eastern Europe”.
During this visit, head of delegation Mrs. Yan Aoshuang, Mayor of Tirana and Head of Tirana Municipal Council visited the “Lake’s Park” while inaugurating “Chinese talks” an installation of the Chinese building tradition in Albania; this space will serve as a recreational place and talks among friends of any age. As a symbol of the friendship among two cities, in the “Lake’s Park” there were planted 24 fir trees.