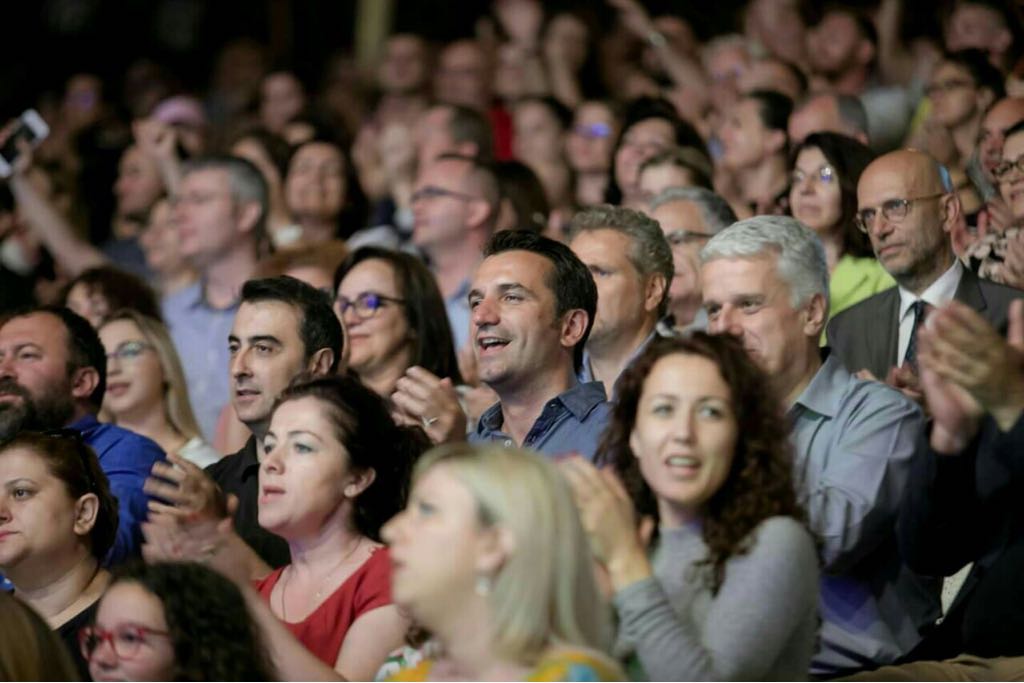 Tirana already has a new stage that will welcome the public on festivals, concerts, theaters, cirque shows and summer open cinema, in four seasons, that has transformed the Artificial Lake’s Park in an important cultural and entertainment area for the citizens.

The harmonious sounds of the Band of the Armed Force opened last evening a new era for the cultural live of the capital.
For the first time, in a night under the moon light, 400 artists performed in the stage of Tirana Amphitheatre, which’s stairs were full of citizens of all ages, to attend the concert prepared form Tirana Municipality on the occasion.
In his opening speech, Mayor Erion Veliaj announced the good news that this new artistic stage of the capital will offer a variety of daily activities.

“The good news is that almost every night there will be activities that will joy the re-born Amphitheater of Tirana’s Lake” said Veliaj. Tirana’s Open Theatre was returned to the park of the Artificial Lake, as a high-toned area in service to artists, culture, to the today public and to the generation of the future. Veliaj emphasized that despite the skeptical and critical statements; these investments will not only improve the life of citizens, but at the same time will generate incomes for the economy of the city. The new theatre will contribute for a more modern Tirana, with a strongest economy and incomes coming from all the activities to be implemented here.

Mayor Veliaj praised these three years of leading Tirana Municipality, as the best of its life, while guaranteed that the work for implementing further transforming projects will not stop. “Soon there will be three years that our team, every single one in our team, took over the challenge to leads Tirana. And I believe that for me have been the three best years of my life and I heartily thank you for the trust you gave us. The best days are yet to come! We’ve manifested that here in Tirana, when we work together, when we give a hand to one another, when we give trust to each other, we can make wonder happen, we can male reality from things that seemed impossible”.

He guaranteed the citizens that the work will continue with the same engagement and the same trust in implementing other projects. “We will work hard even in this last year of our mandate, to justify your trust. There is a lot to be done, other new theatres, other new initiatives but we need you to keep trusting us” Veliaj declared while announcing a series of other initiatives that will align Tirana nearer to the developed European countries.

Veliaj shared a personal emotion with the public, when at age of 4 altogether with his father were sitting there at the stairs of the Amphitheater. “My mother made me a surprise, she showed me this photo of my father and me right here at the stairs of this theatre of Artificial Lake of Tirana, I got very emotional and then I thought: – We don’t just build infrastructure, we don’t jus lay bricks and concrete, don’t just light up streets and plant trees, in fact in this city we build memories. I do not know what will these 4 years old here today will become, but I know for sure that if they grow up in a city that marks their life with such memories, such beautiful memories, maybe the future mayor or prime minister or president of Albania will be one of them” – said Veliaj.

Present at this activity was also Mr. Aldrin Dalipi, President of Tirana Regional Council and Head of Tirana Municipal Council.
Citizens of the capital in this new scene for more that two hours enjoyed the sounds of Olen Cesari’s violin, musical show, ballet, symphonies and arias from world wide and Albanian repertoire. Under the conduction of Noorman Widjaja performed the Orchestra of Albanian Radio and Television; Fanfar Tirana Group, the chorus of the national Theatre of Opera and Ballet and soloist ballet dancers of the Ballet School.

The renewed Amphitheater has it scene, the podium, dressing rooms for artists and a modern technical room of visual projections. With this new investment the cultural life of the capital, especially in the Artificial Lake area, will revitalize even more bringing citizens near to nature and art.