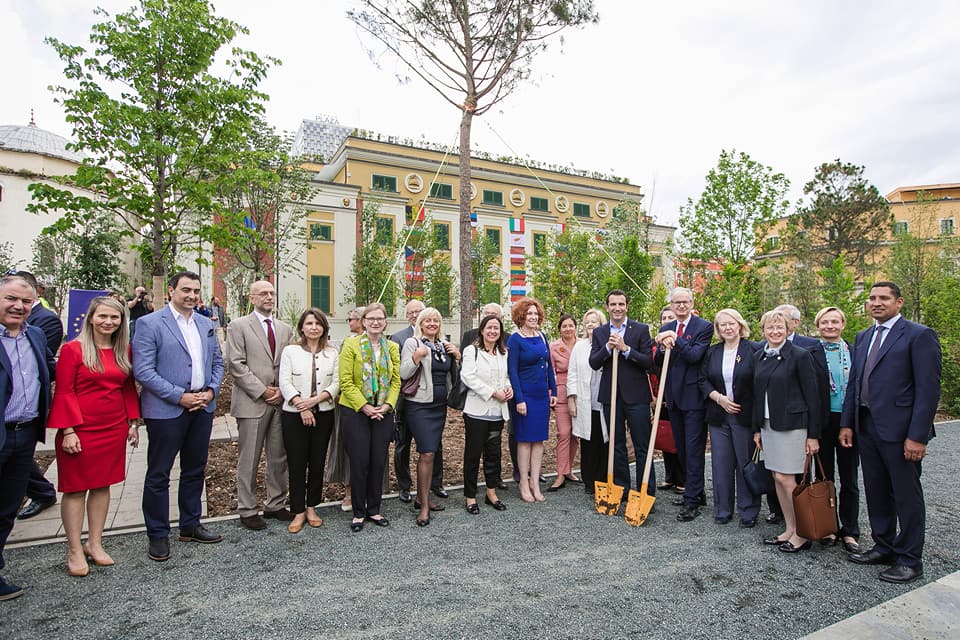 Europe Day in Tirana was celebrated with the inauguration of “Europe’s Park”.
Tirana’s Mayor Mr. Erion Veliaj, accompanied by the General Director for Enlargement at the European Commission, Mr. Christian Danielsson, EU Ambassador in Albania, Ms. Romana Vlahutin, President of Tirana Regional Council also Chairman of Municipal Council, Mr. Aldrin Dalipi and representatives of EU member countries in our country, planted trees in the new park after the monument of the National Hero in “Skanderbeg” Square, bringing a piece of Europe in the very heart of Tirana.
In his opening speech, Mayor Veliaj stated that this new park represents the European ambition of the citizens of our country, while adding that the transformation of this square and the space that has been a year ago the largest space for cars, now is a space totally dedicated to citizens.
The head of the municipality stated that Tirana is in the avant-garde of Albania’s European integration and that its’ transformation into a European city is the fulfillment our European ambition.
Mr. Veliaj underlined that Tirana Municipality itself represents in some way the European Union, because many of those who work today to implement various projects in the city have brought together their experiences as students or worked as immigrants in Europe.
The General Director for Enlargement at the European Commission, Mr. Christian Danielsson, praised the fact that a space previously dedicated to cars, today has become a space that with the various recently planted trees will represent the great European family in Tirana. He added that after several years the park will be turned into a European forest in Tirana.
Along with Skanderbeg Square, Tirana becomes one of the most unique capitals in the Balkans with a very significant area in its center dedicated entirely to the citizens.
In the name of friendship and cooperation between the two cities, Mr.Veliaj gave to Mr. Christian Danielsson “The City’s Key”.
In the framework of Europe Day, different streets of the capital and the building of Tirana Municipality were decorated with flags of the European Union countries.