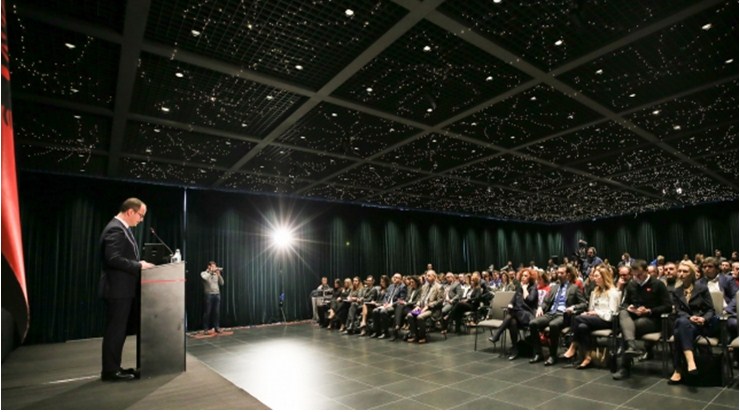 The Ministry for Europe and Foreign Affairs organized a regional seminar on Territorial Cooperation Programs in which Albania adheres, with a focus on the coordination of European Union funding instruments.
Minister for Europe and Foreign Affairs Mr. Ditmir Bushati said that this is a decisive year for Albania’s progress towards EU membership and that the continuation of the implementation of the justice reform will enable Albania to join the two neighboring countries, which have already opened accession negotiations with the EU.
The European Union Ambassador, Ms. Romana Vlahutin, considered cross-border and transnational programs as important as they not only enhance the quality of life in the countries of the region, but build trust among people, enable the exchange of knowledge, cultural values and traditions among them. Among other things, she emphasized the need for deepening of cooperation between the regions.
Ms. Ana Verushi, President of Korça Regional Council moderated the Panel for Public Institutions and emphasized their role in the Territorial Cooperation Programs. Mayor of Tirana, Mr. Erion Veliaj, emphasized the importance of cooperation between the cities.
As an example, Mr. Veliaj brought co-operation between the Tirana’s and Verona’s Municipalities, where thanks to the establishment of a joint public cleaning company, Tirana is cleaner than three years ago. Soon, on the streets of the capital will circulate electric buses, which come not only as an improvement of service to citizens, but at the same time as an example for reducing air pollution. At the conference “Territorial Cooperation, New Perspectives for Enhancing Integration”, the Mayor of Tirana, Mr. Erion Veliaj talked about opportunities for cooperation between cities as an opportunity for sharing experiences and development, but added that the order for the first electric buses, which will be the publishers of the revolution in Tirana’s public transport, has already been commissioned.
“As far as public transport is concerned, we are in fifth gear with electric buses. The help that Poland is giving us to exchange experiences between our operators and employees and the Polish public transport companies, has benefited the city and I believe that this year we will see the results of it in Tirana, as we made the first orders for electric buses. In the long run, we will understand how much inspiration and very little funding from a member state can bring extraordinary results,” said Mr. Veliaj.
Focusing on the transportation revolution in the capital, Mr. Veliaj stated that the construction of 10 km of bicycle lanes is going fast, while adding that 4 thousand bicycles will arrive in February. “Today Tirana is a major construction site for the construction of a bicycle network. If you’ve been walking around in Tirana, you’ve probably noticed this. It is the fruit of a project, among many, that has funded the Dutch embassy, for mobility in Tirana. Not only are we running the lanes, but for a month we will have about 4000 new bicycles, which I believe will bring a revolution in how this city works,” said Mr.Veliaj.
Despite the encouraging amounts of money spent by IPA funds or cross-border cooperation funds, Mr. Veliaj stated that special attention deserves not only the amount but also the way funds are spent. The Mayor emphasized the importance of cooperation between cities, which can produce results far more efficiently than collaborating with other organizations
“One of the things that some of you that had time since coming in Tirana said that how clean Tirana was. I’m probably the biggest critic of how cleanest our city should be. But one of the things people forget is the cooperation between the two cities, Tirana and Verona.
Two cities did not apply for EU funding, but created themselves as a public company. Today, for the lowest price of family payments, we have the highest quality of cleaning,” said Mr. Veliaj.
As another successful case of cooperation, Mr. Veliaj also recalled new apartments for the Roma community, where despite years of funding for seminars, nothing had changed for them. He said that through co-operation between the Tirana Municipality and Italian government, was made possible the arrangement and solution of the housing problem for 450 Roma families. “Only from the IADSA” funds, we solved the biggest problems of the Roma and Egyptian communities in Tirana Municipality, which is the largest municipality with 1/3 of the population in the country. We just open new apartments in Lanabregas, the next week we will open new flats in Shkoza neighborhood. If you compare how much money the EU has spent in total for 27 years for the Roma community, it’s probably 1/1000, but I think it was more efficient, because instead of training the municipalities, write infinite reports, organizing consultations, seminars, conferences, in a country like the Balkans, where we are all “over trained” they chose to join a local partner, such as Tirana Municipality, to accommodate 300 families in one place and other 150 families in another place”,underlined Mr. Veliaj.
In his speech, Minister for Europe and Foreign Affairs, Mr. Ditmir Bushati, said that this event opens a decisive calendar of events for Albania’s success towards European Union membership. He emphasized that there is a clear need for better orientation and coordination of actions in the framework of cross-border cooperation, as well as their integration with the priorities and programs of the central and local government of our countries, ensuring harmonization with the investments that are being undertaken to our cross boundary regions.
“This coordination creates the necessary platform to exploit the potential of all national and regional funding instruments provided by the EU’s regional policy. Only in this way we can have a real impact on improving the lives of our communities and guarantee the sustainability and continuity of reforms that meet the common European and national goals,” said Mr. Bushati.