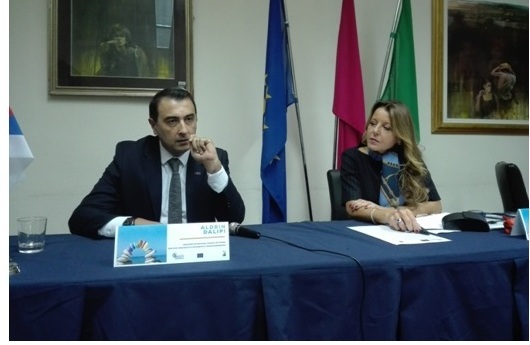 On 8th November, the President of Tirana Regional Council, Mr. Aldrin Dalipi participated in the International Conference on “The Future of EU Cohesion Policy – Open Dialogue on Pre-Accession”.

Cohesion and pre-accession policies, migration, EUSAIR and the Adriatic Ionian Region, the fight against fraud with EU funds, were the four topics addressed during the Conference organized by the IPA Adriatic CBC Program with the initiative of the Managing Authority, Ms. Paola Di Salvatore, in the premises of Abruzzo Region in Brussels. At the conference was emphasized the need to resume cooperation between the Adriatic Sea basin countries within the upcoming EU programming period with a new multilateral program which will benefit from the positive experience of IPA Adriatic CBC.

In his speech, Mr. Aldrin Dalipi, President of Tirana Regional Council emphasized that: “We all, the Adriatic Ionian basin countries, non-EU member states, feel ourselves European citizens and this gives us more energy when faced with the challenges of pre-accession.

The hopes and commitments of Albania, Serbia, Montenegro and other pre-accession countries are big, so we ask the European Commission to continue investing in resources of territorial cooperation and cross-border programs that have the necessary vision of territorial cooperation as IPA Adriatic CBC. ” Speakers at the conference were MEPs from the European Parliament, representatives of the EU institutions and the countries of the Adriatic-Ionian region.

Their speeches gave an overview on the current and future framework of the EU’s cohesion policy and territorial cooperation, as well as on issues relating to relations between member states and pre-accession countries, and approaches to future development in the Adriatic-Ionian and Mediterranean programs, which will establish the bases of future EU programs from 2021.