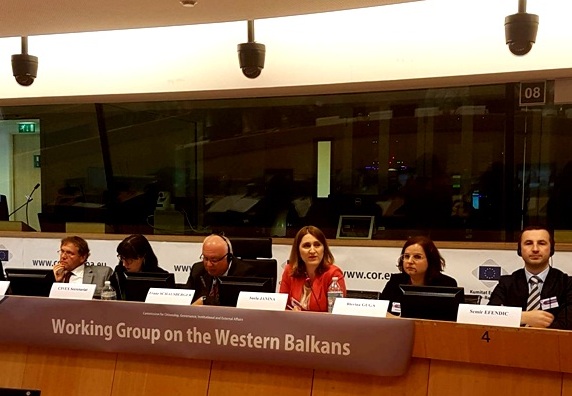 The European Committee of the Regions organized on 31 May 2017- 1 June 2017 in Brussels the “Enlargement Day”. Enlargement Day is a forum that supports the EU enlargement process and in particular encourages the involvement of local and regional institutions in the integration process.

Albania was represented at the activities, by the Ambassador of the Republic of Albania to the European Union Ms. Suela Janina, and Ms. Blerina Guga, Executive Director of the Association of Albanian Regional Councils.

Director of AARC Ms. Blerina Guga addressed on 31 May on the meeting of the Working Group on the Western Balkans by sharing with participants the developments and challenges of local government in Albania, in implementation of substantive reforms such as territorial administrative reform with direct impact on citizens’ lives, the progress toward regional reform and the law on regional development, the reform on vocational education and the approximation of it with the European practices and frames and also with the needs for qualifications of the national and foreign work market.

An important part of the speech of Ms. Guga was dedicated to the regional development and active representation of the Albanian regions in international organizations such as the Adriatic Ionian Euroregion (AIE), the Conference of Peripheral Maritime Regions (CPMR) and the partnership in projects within the framework of EU calls for territorial cooperation.

Ms. Guga responded to the interest of commissioners on the involvement of local government institutions in decision-making and processes towards European integration and consultation.

Ambassador Janina in her speech underlined the constructive role of Albania in the relations of regional cooperation and the added value that the Berlin Process has given to this cooperation.

The Ambassador also thanked the European Commission, which through the recent project that has started to implement in Albania “Municipalities for Europe”, is helping to strengthen the administrative capacities of local government and increasing their role in the European integration process.