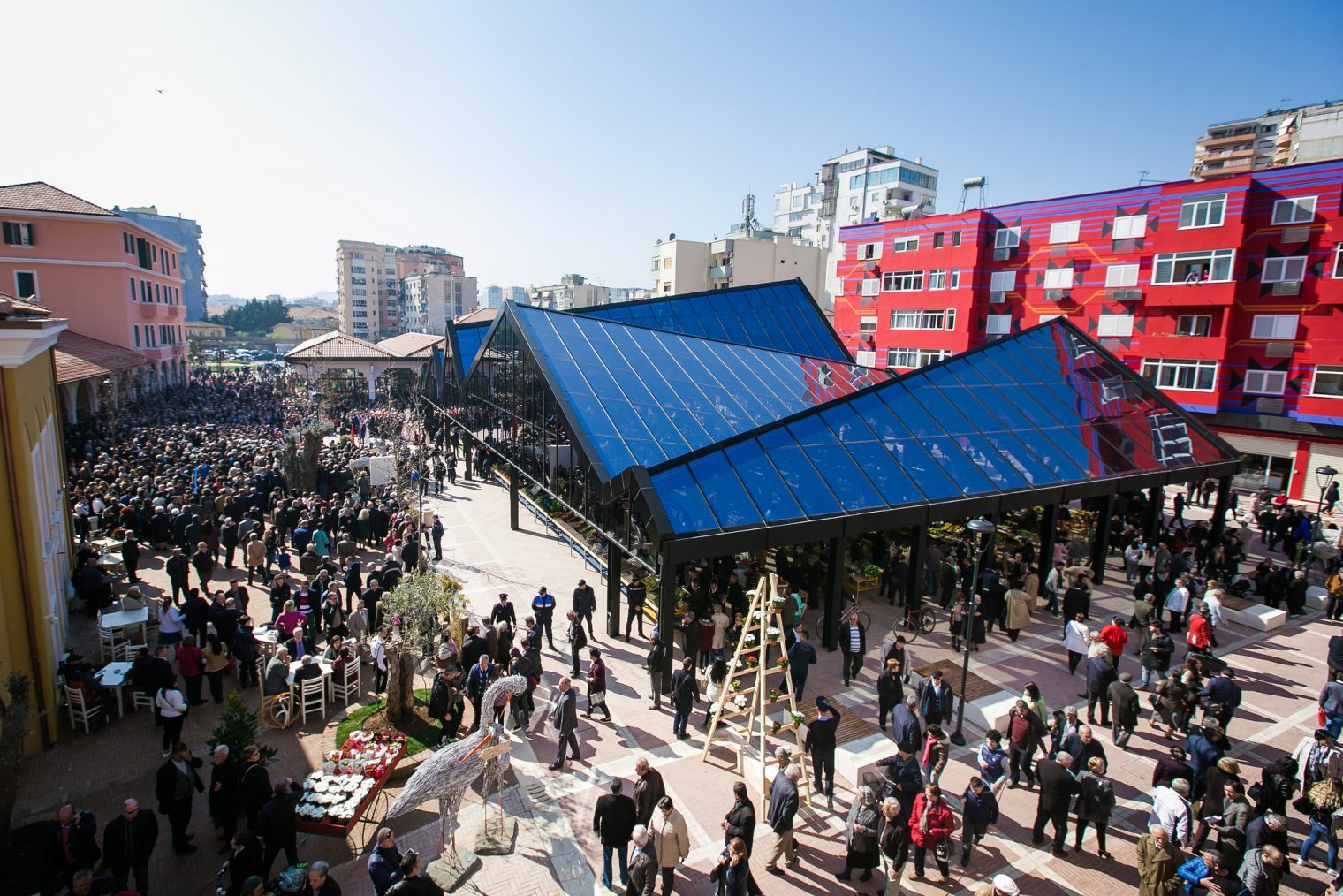 On the Summer Day on March 14th, the reconstructed “New Bazaar” opened the doors for all Tirana’s citizens, where 308 businesses have started their economic activity generating over 1,000 new jobs.
Thanks to the investment of Tirana Municipality, with the financial support of the Albanian Government and the Albanian – American Development Foundation (AADF), the whole area is transformed into a space that will function 24 hours per day; during the day it will function as a green trade and bazaar, while in the afternoon the focus will be the on the promotion of local culinary, restaurants and other cultural activities, festivals and fairs.
The opening ceremony of the New Bazaar, was attended by the Prime Minister of Albania Mr. Edi Rama, ministers of the government, Mayor of Tirana Mr. Erion Veliaj, President of Tirana Regional Council also Chairman of the Municipal Council Mr. Aldrin Dalipi, members of Municipal Council and members of the parliament. Head of the government, Mr. Edi Rama, praised the profound transformation of that area, as the best evidence of the power of popular vote.
“Just two years ago, this place looked still as 100 years ago; an area where everyone was trying to survive in each own market stall, surrounded by dust, walking into the open catch pits, facing the mud, flies and insects. Today we can see what power has the vote, what power has the participation of everyone in the community governance process of making the right choice. Today Tirana Municipality is turned into the house of the community, where day and night the focus is on its people, on common areas, on families, on children and the elderly, where projects on large transformation are prepared day-night, “- said Prime Minister Rama in his speech.
He emphasized that this project is led with determination and extraordinary willingness from Tirana Municipality. Wishing all citizens for the Summer Day, Mayor of Tirana Mr. Veliaj considered the transformation of the New Bazaar as a fantastic job that was made possible thanks to the commitment to work and being united in every decision made. Mr. Veliaj said that this investment has generated a considerable number of businesses, translated these into over one thousand new jobs. He also added that the New Bazaar is already a space that radiates a new model of development. Mr. Veliaj emphasized that this project brings for the first time in Tirana a new culture of doing business in cooperation.

Co- Director of the Albanian – American Development Foundation (AADF), Mr. Martin Mata, thanked the Municipality of Tirana for this project, emphasizing that the support and cooperation will continue with other areas of Tirana.
The deep and full intervention on “Avni Rustemi” Square and the “New Bazaar” area has created optimal conditions for meat, fish, fruits and vegetable markets. In the meat and fish market are located 25 sales units. Also there are located bars and restaurants, completing the multifunctional character of the market.
While “The Green Market” is conceived as a contemporary stylization of traditional roof houses of Tirana, but treated with resistant up to date materials. In this object are accommodated 169 stall markets with a total of 120 merchants, where 80% of traders are existing traders of New Bazaar before reconstruction, 10% are with products from administrative units (former communes) and 10% are best innovative models of the market, totaling a number of 308 businesses generates over 1 thousand new jobs.
The revival of “Avni Rustemi” square, one of the most critical part of the bazaar, already offers countless opportunities for activities at any hour of the day and along with the reconstruction of nearby buildings, has turned the area into an attractive point for tourist in Tirana.