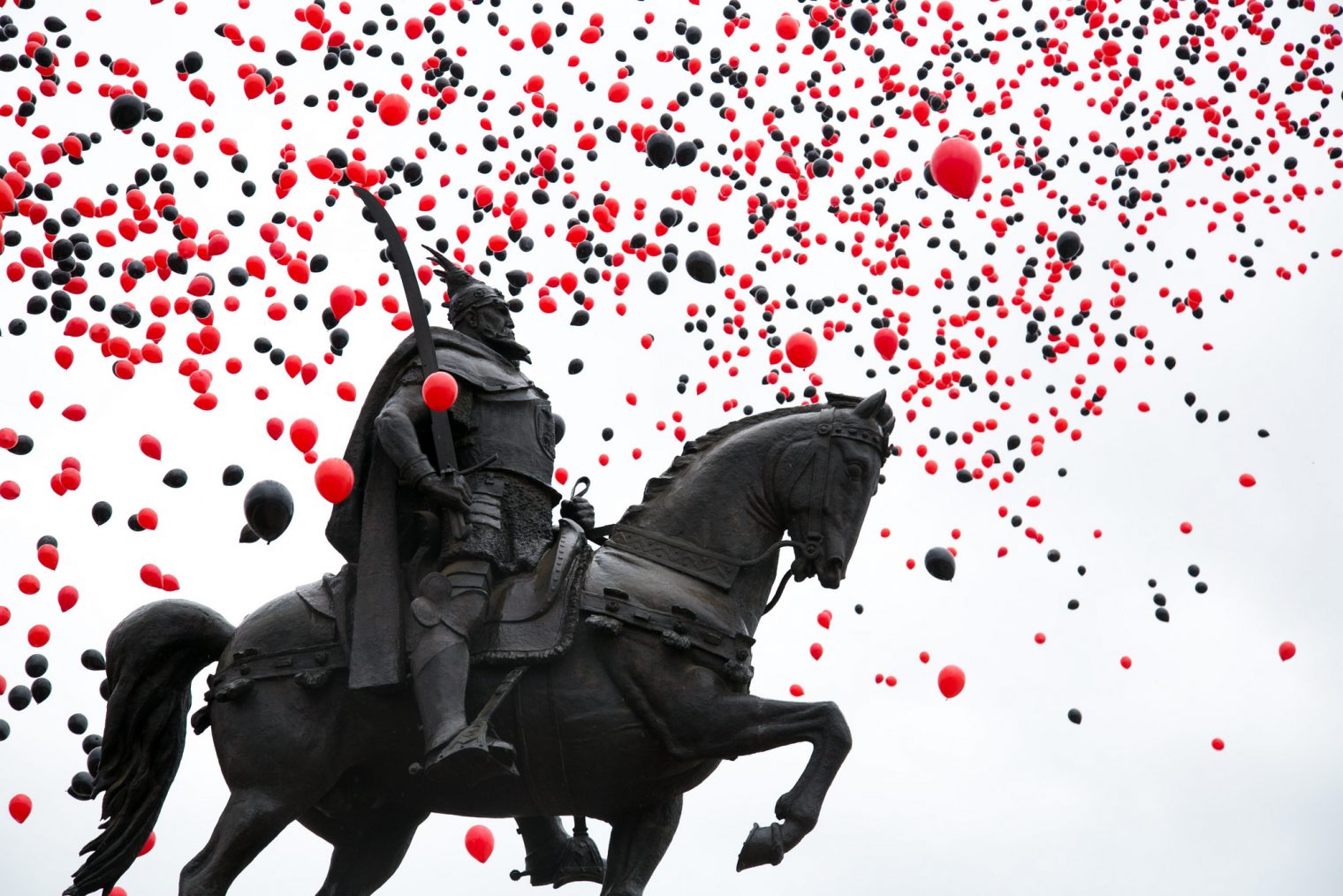 On November 28th Tirana Municipality honored Mr. Adem Demaçi with the title “Honorary Citizen”. At the “Skanderbeg Square”, the symbol square for Albanians, under the sounds of brass orchestra of the capital was held the ceremony of raising the National Flag. Present at the ceremony was the Mayor of Tirana, Mr. Erion Veliaj, President of Tirana Regional Council also Chairman of the Municipal Council, Mr. Aldrin Dalipi, and members of the Municipality and the Municipal Council of Tirana . During the ceremony of raising the national flag, the attendees congratulated all Albanians for this special day. Mayor Mr. Veliaj said that in these moments, the biggest patriotic act is working to modernize the capital city and all Albania. “We need to do more today, not like 104 years ago when we fought with weapons, we have to do much more working, and today we need to modernize Tirana and all Albania. So, the greatest act of patriotism we can do is to let words apart, to open more construction sites like this square, to focus on work and to modernize our city, the capital of all Albanians. We successfully completed yesterday an initiative, “Union of Albanian Municipalities” in the region; because we realize that although we are divided in 5 countries, we have the destiny of being surrounded by other Albanians and this is a reason to work together”- said Mr. Veliaj. Mr. Veliaj said that next year this day, the flag will be raised in the most beautiful square of the Albanian territories and in the region. Later on, Tirana Municipality honored with the title “Honorary Citizen” the famous Kosovo’s politician and writer Mr. Adem Demaçi. In a special ceremony on the premises of the Municipal Council, the Mayor of Tirana, Mr. Erion Veliaj and the Chairman of the Municipal Council, awarded to Mr. Adem Demaçi the title of “Honorary Citizen” and “The Key of the City”, with the motivation for outstanding intellectual qualities, a human symbol of the versatile resistance for freedom, independence and prosperity, for contribution and extreme sacrifices for the people of independent Kosovo, strengthening the traditional ties between citizens of our nation. In his speech, mayor Mr.Veliaj said that he was happy of having the opportunity of awarding this honorary title to a personality of the Albanian cause, on the day of Albanian Independence. The chairman of the Municipal Council, Mr. Aldrin Dalipi praising the figure of Mr. Adem Demaçi, emphasized that he is a great patriot and a central figure in the struggle for independence of Kosovo, and already has secured his place of glory in the history of all Albanians. Mr. Adem Demaçi thanked Tirana on this appraisal, mentioning that his permanent desire of all times has been that all Albanians could celebrate their independence day in freedom.