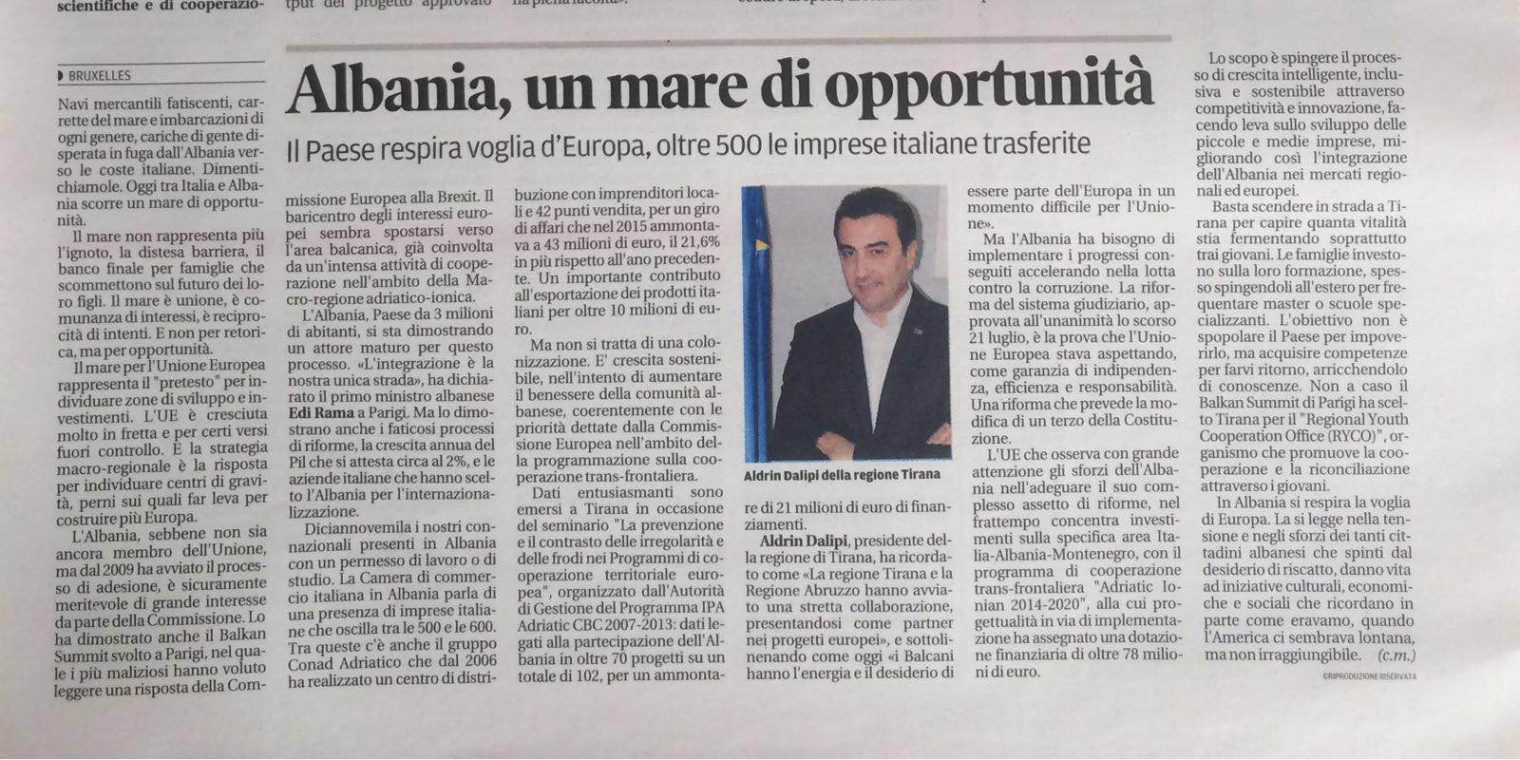 Forget of the destroyed merchant’s ships and vessels of any kind, overflowed with desperate people grieving to escape from Albania to the Italian coast in the early 90s! Today between Italy and Albania lays a sea full of opportunities and exchanges. The sea is no longer unknown, nor a barrier and it’s not the only way for families projecting beyond it the future of their children. The sea is already symbol of union, is the bridge that connects the common interests of the two countries. This is not rhetoric, but the mere synthesis of all common opportunities and the visions of the two countries.

The sea to the European Union is a “premise to identify new areas of development and investments. The EU has grown rapidly, and in some aspects even out of control. Macro-regional strategies are exactly the answer to the need to identify new development centers and new pillars on which to build more Europe. Albania, although not yet a member of the European Union, since 2009 has begun the accession process, and is certainly worthy of greater attention by the European Commission. Just as it showed itself in the Balkan Summit held in Paris, where some malevolent groups tried to read as a response of the European Commission for Brexit. The center of gravity of European interest seems to be shifting towards the Balkan area, an area which is already included in an intensive cooperation within the Adriatic-Ionian macro-region. Albania, a country of 3 million inhabitants, has already shown that it is a mature actor in this process. “Integration is our only way,” said Albanian Prime Minister Edi Rama in Paris. But is has also shown maturity and fulfillment of the processes of carrying out difficult strategic reforms, the annual growth of about 2% of GDP, and the growing number of Italian companies that have chosen Albania in their internationalization process.

Nineteen thousand Italians are living and working in Albania today with a work or study permit. Italian Chamber of Commerce in Albania indicates a presence of 500-600 Italian companies. Among them the group Conad Adriatic, which since 2006 has created a distribution center with local businessmen to 42 units of trading, on a turnover of 43 million euro for 2015, 21.6% more than the previous year giving an important contribution to the growth with over 10 million on Italian export products. But these figures are not indicative of colonization, on the contrary! These are figures of a stable growth, which increases parallel welfare and quality of life of the Albanian community, in accordance with the priorities and standards set by the European Commission under the program for cross-border cooperation.

Enthusiastic data regarding the above, were shared in Tirana at the International Conference “Prevention and the Fight Against Irregularities and Frauds in European Territorial Cooperation Programs”, organized by Managing Authority of the IPA Adriatic CBC Programme 2007-2013 in the first days of July. These data showed the participation of Albania in over 70 projects out of 102, and acquisitions funds amounting to 21 million Euros in funding.

Aldrin Dalipi, President of Tirana Regional Council, said that “Tirana Region and the Abruzzo Region have already established close collaboration, applying as partners in common European projects,” emphasizing that “the Balkans today has the energy and steadfast desire to be part of Europe at a difficult time for the EU”.

But Albania should implement adopted reforms to achieve progress and accelerate the fight against corruption. The reform of the judicial system, adopted unanimously on 21 July, was the proof that the EU expected from Albania, as a guarantee of independence, efficiency and accountability of the judicial system. The European Union is following with great attention the efforts of Albania in implementing structural complex reforms, while focusing on strategic investments in the Italy-Albania-Montenegro, through the program of cross-border cooperation “Adriatic Ionian 2014-2020”, the realization of projects which have been assigned a budget of over 78 million Euros. This program aims to support smart, inclusive and sustainable growth, by promotion competition and innovation, relying on the development of small and medium enterprises and the integration of Albania into regional and European markets.

While walking in the streets of Tirana, one easily understands how much vitality and youth this city has. Families invest in their children’s education, often abroad, to get a Master’s degree or attended specialized schools. Their objective is not any more to leave once for all, but to return, enriched with the acquired skills and knowledge. It was no coincidence that the Balkan Summit of Paris chose Tirana as the center of “Regional Youth Cooperation Office (RYCO)”, an organization that promotes cooperation and reconciliation in the region through youth exchanges. In Albania, the desire and affiliation to Europe fills in the air. It feels to the efforts of many Albanian citizens driven by the desire for vitality and change, give life to cultural, economic, and social initiatives that should  remind us Italians how we were when America looked far away, but not unreachable!