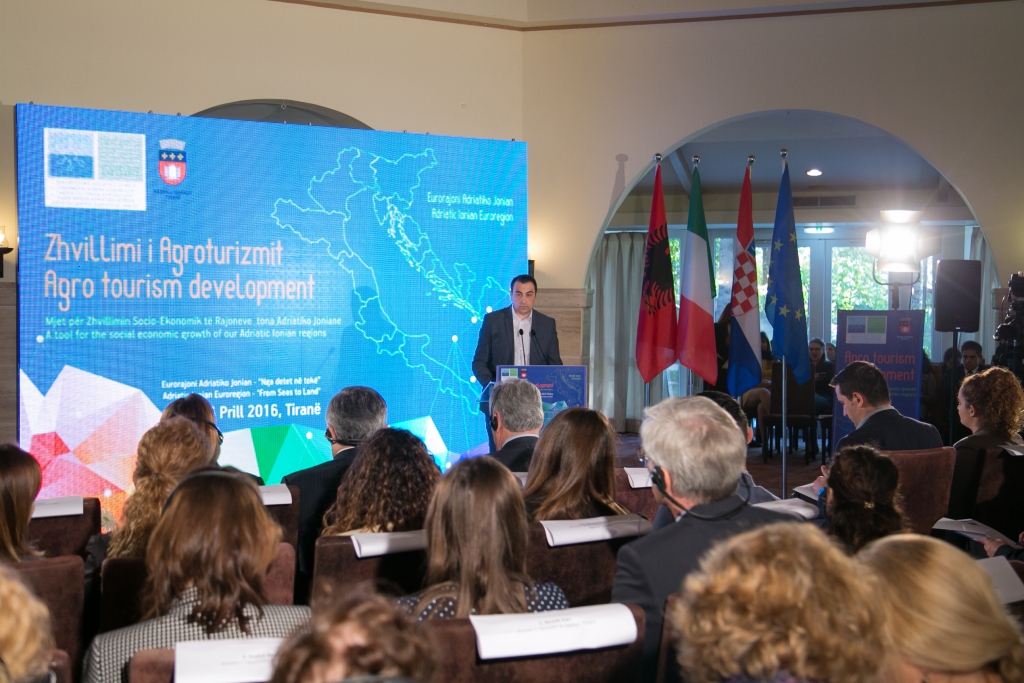 As an initiative of the Presidential Bureau of the Adriatic Ionian Euroregion under the special attention of the President of the Regional Council of Tirana, at the same time, Deputy President of Adriatic Ionian Euroregion was organized in Tirana on April 26th 2016 the international conference “Agro-tourism’s Development – A Tool for the Socio – Economic Growth of our Regions”

The aim of the Conference was to share the latest developments in the Adriatic Ionian Euroregion and discuss on forthcoming project and activities among the countries of the AIE for the coordinated development of agro tourism, as a tool to contribute to the socioeconomic progress of the AIE regions in cohesion with the objectives of the European Union Strategy for the Adriatic Ionian Region (EUSAIR).

Mr. Erion Veliaj, Mayor of Tirana, in his speech at the conference, emphasized the potentials and capacities of Tirana City and Region to develop agro-tourism as a tool to sustainable development, while learning from the best practices of other neighbor countries. Mr.Veliaj said that Tirana with its rich nature, culture and tradition and wonderful climate offers all that is needed for the development of agro tourism. Ms. Paola Di Salvatore, Head of Managing Authority IPA Adriatic CBS, while addressing the conference, emphasized the importance of common regional projects on increasing socio – economic cohesion among all the countries of Adriatic Ionian Euroregion and agro tourism development as a form of economic development that embodies respect for our land, our seas and the work of the good people of our prosperous region.

The conference was addressed from Ms. Odeta Barbullushi, Deputy Minister of Foreign Affairs of Albania, Ms. Adela Shera Karapici, Deputy Minister of Economic Development, Tourism, Trade and Entrepreneurship of Albania, Mr. Giovanni Di Stasi, Ex President of the Congress of Local and Regional Authorities of the Council of Europe, Mr. Luan Bregasi, President of “Business Albania” and Mr. Agim Rrapaj, President of Albanian Agribusiness Council, Mr. Alfred Mullaraj, President of Durres Regional Council, Member of AIE and Mr. Angelo Belliggiano, President of the Course of Degree in Agricultural Science and Technology at the University of Molise, Italy. The conference was moderated from Francesco Cocco, secretary general of the Adriatic Ionian Euroregion.