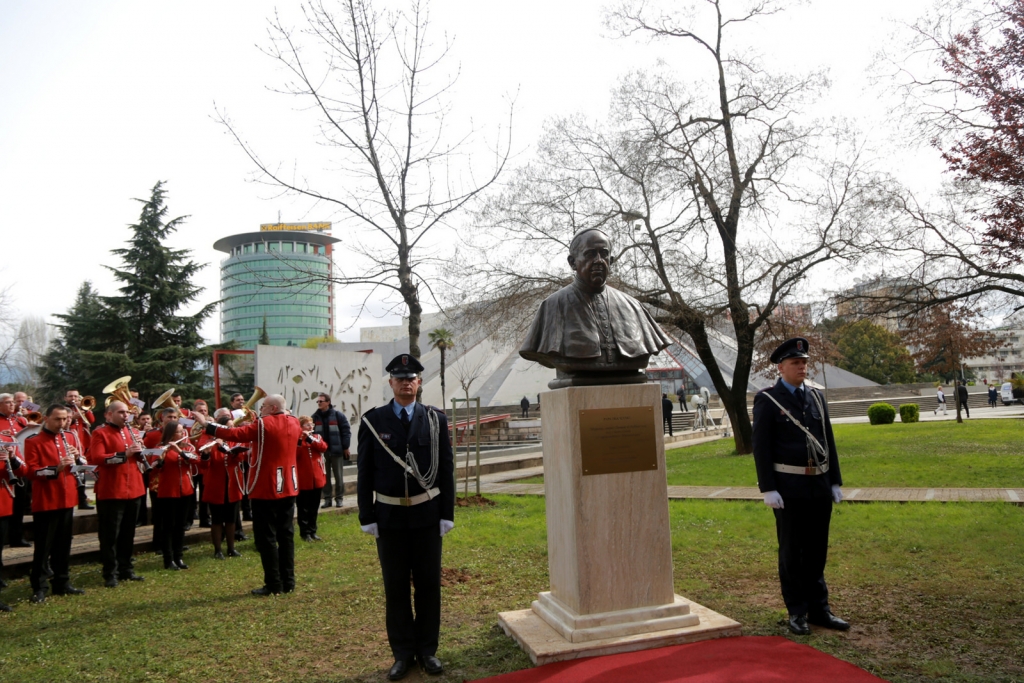 Was inaugurated in the triangle of green near the” Peace Bell”, on the Boulevard “Dëshmoret e Kombit ”   in Tirana , monument of Pope Francis, in memory of the visit he held on September 21, 2014 in Tirana. His bust was unveiled during a special ceremony by the President of the Republic of Albania, Mr. Bujar Nishani, the Mayor of Tirana, Mr.  Erion Veliaj, and the Apostolic Nuncio in Tirana, Archbishop Ramiro Moliner Iglesia, with the participation of dozens of other political and religious personalities.

In his speech, President of the Republic of Albania Mr. Nishani praised the figure of Pope Francis and in particular the selection he made to Tirana, as the starting point of his visits to European countries.

” Today I’m also honored  as  the President of the Albanian state , but also as a citizen of this country , I am filled with pride when i think we all have the destiny to witnessed how the bust of the Holy Father is being inaugurated and perpetuated precisely near here  the “Peace Bell”, in front of  the former dictator museum , the failed ideology of which once tried to tear down churches and mosques , imprisoned clerics and killed the innocent believers  “, said  Mr. Nishani .

“I do not know if any other Municipal Council decision is taken in so unanimously and without hesitation so as the decision, however modestly, to honor, the Holy Father through this gesture. Beyond the tensions, clashes and quarrels that we have had for many things, on an issue like this we all agreed “, said the Mayor of Tirana Mr. Veliaj. Also, he stressed that the arrival of Pope Francis in Albania was obviously a beautiful moment for all Albanians, regardless of religious affiliations. According to him the message that the Holy Father gave to Albanians is not linked exclusively to any religion, but goes to the heart of each of religious philosophy that is the message of brotherhood, harmony, unity and solidarity.

Further he added that Albanians have had a difficult history, but none of the problems does not find its roots in religion and faith. Albania has proved a unifying factor of what could be a reason to be divided. Rightly, the Holy Father called religious brotherhood. A word we do not ever used to describe something that was simply taken for granted. But that is actually the most appropriate description of what they have managed to build all together as Albanians, despite the difficulties”, concluded his speech Mr . Veliaj.

In this ceremony held his welcoming speech the Deputy Prime Minister of Albania , Mr. Niko Peleshi , who emphasized that the visit of Pope Francis , almost two years ago ,made  recognizable our  religious harmony around the world . Meanwhile, the Apostolic Nuncio in Tirana, Archbishop Ramiro Moliner Iglesia , thanked the Municipality of Tirana for cooperation and honoring Pope Francis .He stressed that Albania is an example of peaceful coexistence among believers of different religious communities .

The bust is a work of the author Qazim Arifi and was  realized thanks to the cooperation between the Municipality of Tirana and the Holy See Embassy in Tirana.