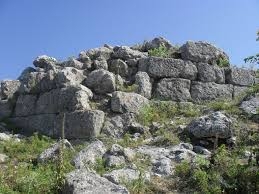 Data clearly shows the Illyrian period and ancient Illyrian culture . Known by stone blocks that make up its walls over 3m . This castle , during the period of late antiquity , controlled way to reveal the Lagoon Peza in Pekin , to become an important point of defense of Durres . Also , these types of fortified settlements served to protect all the residents of the area , in case of attack from other tribes .This castle is part of Peza Administrative unit. It declared a cultural monument.