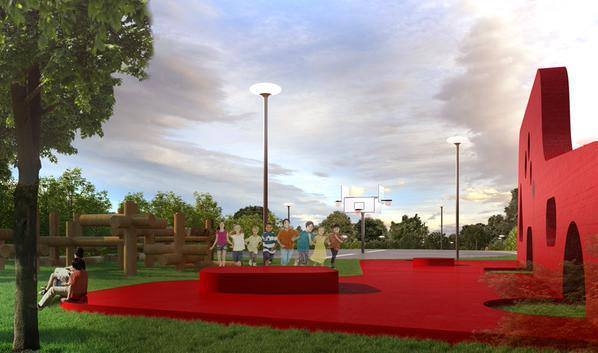 Mayor of Tirana Region Council ,Mr . Aldrin Dalipi attended the presentation by the Mayor of Tirana ,Mr . Veliaj the master plan of Tirana Lake , part of which is the project for the entrance of the park , which reduces construction in the area in what is now the National Guard , but in turn adds green spaces. In his speech , the mayor of Tirana , z.Veliaj expressed satisfaction that the projects that are part of this master enhance green spaces and entertainment for the citizens .
Although there was misinformation about the entrance of the park lake , the good news  is the fact That the lake hasn’t lost even 1 square mm, but have been added 5.5 hectares of former Republican Guard ,” said Veliaj . He added that the project park entrance of the lake, not only didn’t provide any new construction, but brings the demolition of 13 from 14 Republican Guard existing buildings, turning the space concerned to citizens.
Of the 14 buildings garde , 13 will be leveled and will be returned as green space lake. Of the 14 buildings will remain only one, which will become the center of public services , a space where people will have a station to get a passport , certificate , to relate pension or economic assistance , “said Mr. . Veliaj .
Also , following the presentation of the Master Park Lake , Mr. Veliaj stressed that in total it consists of 10 mini projects aimed more room entertainment for all ages , ranging from children to adults . ” Master and investments to be made in the lake are divided into 10 smaller projects . One of them is the rehabilitation of the dam , another is the track running , another is the lane for bicycles to close the entire lane running and bicycle and all the pedestrian streets around the perimeter of the lake , especially in the southern half , which it is still unfinished. Another part is the beach area , “said the mayor of Tirana .
He announced that work will begin precisely for the children, with the creation of the park ‘s largest children’s games . ” I am glad that in the ten projects of the park lake , in cooperation with the albanian government , will start from the children , putting them first and thinking about the next generation and not for the next election ,” said Veliaj and he stressed that he was pleased that after only two months of taking office , has made possible the realization of these projects , which will revitalize the entire area around Lake.
The Mayor of Tirana also mentioned the problem of romafamilies , which were located in the southern area of the lake , noting that the city has been able to manage in the best way  this situation , offering them some solutions to be deployed , since subsidizing housing for rent housing in Emergency Transit Centre
Meanwhile, Deputy Prime Minister Mr . Niko Peleshi present at the event, in his speech stressed that the drafting of the master view and contest entry share ultimately Park for the first time the green area it built .” Through two plans green surface of Lake added about 5.5 hectares . It is a response to citizen concerns . Guard returns to area citizens. The main public services will be integrated closer and be more transparent . The Municipality of Tirana is here today to show its will, said Mr .Peleshi .
The head of the Tirana Region Council ,Mr . Aldrin Dalipi in social networks praised the new project greater Municipality in the Region of Tirana as a master who gives breath to the capital. Also , Mr. Dalip thanked the mayor of Tirana a model citizen action for the liberation of space in a part of the park to convert septic tank , following the roma families in normal shelters .
Share post: